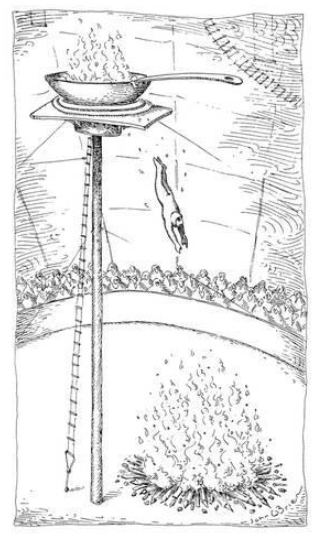 This week’s’ Around The World stays clear of Donald Trump and turns the spotlight back to our fearless leader Trudeau.* ** Understandably he takes a back seat to the political circus that runs 24/7 south of the border, but with the Alberta-B.C. war of words heating up over the imperilled Trans Mountain pipeline, Trudeau takes centre stage (he is a drama teacher after all). And with the curtain raised and the Canadian crowd watching for a performance they’d paid for last election...drum roll please... we see our Prime Minister doing nothing, standing motionless with a bewildered look on his face.

The attached article from the Globe & Mail calculates the cost of Trudeau’s failure of leadership at $15 billion a year to the Canadian economy. Trudeau Doing Nothing. But as Margaret Wente writes, “you wouldn’t know this from Mr. Trudeau”. This is the Liberal governments’ problem: ideology has replaced economics as the basis for government decision making. Being opposed to pipelines may be good politics to his base, but bad financially for all Canadians. To be sure, Canada’s standard of living rests on the extraction of raw materials from the ground -oil included. Trudeau knows this, but is hoping that somehow Trans Mountain will get built without his having to take a hardline decision that alienates his political base.
Below is one of the best descriptions of leadership I have ever read, written at the beginning of the 20th century by Rudyard Kipling.

If you can keep your head when all about you
Are losing theirs and blaming it on you,
If you can trust yourself when all doubt you,
But make allowance for their doubting too.
If you can wait and not be tired by waiting,
Or being lied about, don't deal in lies,
Or being hated, don't give way to hating,
And yet don't look too good, nor talk too wise:
If you can dream—and not make dreams your master;
If you can think—and not make thoughts your aim;
If you can meet with Triumph and Disaster,
And treat those two impostors just the same;
If you can bear to hear the truth you've spoken
Twisted by knaves to make a trap for fools,
Or watch the things you gave your life to, broken,
And stoop and build 'em up with worn-out tools:
If you can make a heap of all your winnings
And risk it on one turn of pitch-and-toss,
And lose, and start again at your beginnings
And never breathe a word about your loss;
If you can force your heart and nerve and sinew
To serve your turn long after they are gone,
And so hold on when there is nothing in you
Except the Will which says to them: "Hold on!"
If you can talk with crowds and keep your virtue,
Or walk with Kings—nor lose the common touch,
If neither foes nor loving friends can hurt you,
If all men count with you, but none too much;
If you can fill the unforgiving minute
With sixty seconds' worth of distance run,
Yours is the Earth and everything that's in it, And—which is more—you'll be a leader!

Mr. Trudeau would do well to read this for the well-being of Canadians, though like take decisive action on pieplines, in this regard it appears he’s just not ready to.

*not fearless
** not a leader