Everyone’s heard of Star Wars, but how about Trade Wars? It’s been a long time since this issue has appeared in economic headlines, but here we are. Last week the Trump administration announced they would be levying 25% tariffs (a tax essentially) on Aluminum and Steel, citing National Security. 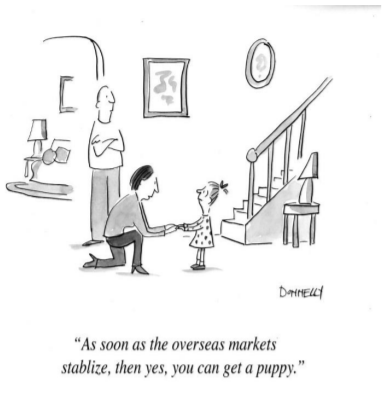 I’ve attached a link to a relevant article from The Balance which summarizes the massive trade imbalances that exist between the United States and other large economies in the world. https://www.thebalance.com/trade-deficit-by-county-3306264 Notably, these trade deficits include China, Canada and Mexico -oh and Germany (verdampt Deutchen!)

President Trump was elected on a platform of putting America’s interests first, and in doing to could very well start an international Trade War. This is destabilizing for the world economy and for capital markets too. That said, what is America’s alternative? The policies being pursued are exactly the same as those pursued by the very countries they are running deficits with in the first place. Walt Disney had 5 of the 8 highest grossing films in the world last year, but you’d never know it if you lived there, because the Chinese government unfairly restricts foreign films while favouring their own domestic film industry. Canada with its Dairy and Egg quota system and softwood lumber subsidies is about everything other than Free and Fair trade. And Mexico is only to happy to allow car manufacturers to set up shop in their low-wage country and export all they make to the Americans, while buying little in return. The Germans do that too. The Big Three (VW, Mercedes and BMW) manufacture very few cars in the US compared with the number of German vehicles driving on American roads.

The issue goes well beyond cars, car parts, softwood lumber and dairy, it has to do with countries looking out for number 1, themselves. Every country on Earth seems allowed to do this (including Canada for Canadians - Trudeau is for Canadians right?!) except the United States. The stink that has followed Trump’s announcement has less to do with the specifics , and more to do with the indignation of other trading countries who are shocked -shocked! that the U.S. would look to level the playing field when it comes to trade. Bottom line, they know if America does achieve fairer trade, it’ll be worse off for them. Their howls of protest attest to this.

When Trump says a Trade War will be easy to win, he’s right, and everyone knows it. The US has everything to gain by starting one, and other countries will bluster but in the end accept the new-new, as the alternative is much worse -for them. America is unique in the world in that their economy is so large it could essentially trade just with itself. If other countries want a piece of the action, they are going to have to accommodate an newly re-invigorated US that’s saying enough is enough. America First.